The recent Manhattan shows—TEFAF New York, which ran from Oct 27-31 at the Park Avenue Armory, and The New York Jewelry & Watch Show, which took place from Oct. 26-29 at the Manhattan Pavilion—provided a rich and diverse selection of jewelry from the medieval to vintage ’70s in museum-quality period jewelry. At shows like this, which run throughout the year in different cities (most notably New York, Miami, Palm Beach and Las Vegas), there are often jewels that have just been unearthed by different dealers and provide a strong representation of the time and cultural aspects in which they were made. Unlike museum exhibits, these shows offer novice and consummate collectors, students and all interested in the medium the ability to touch, try on and potentially purchase the pieces on display: a jewelry enthusiast’s dream!

Here are some of the awe-inspiring pieces found at both shows: 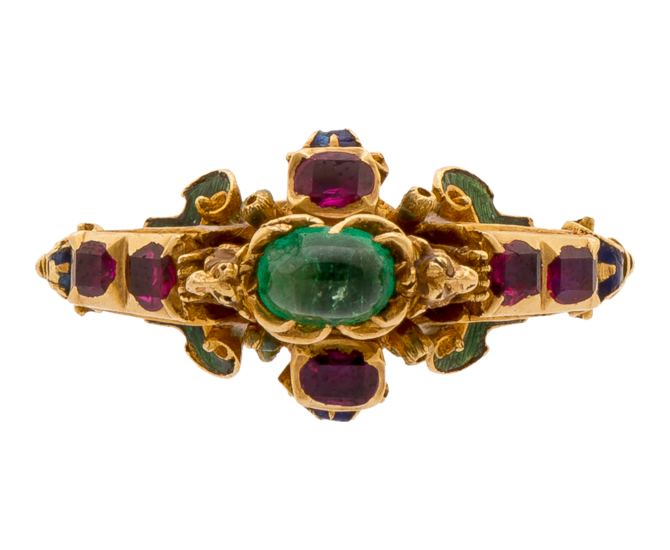 RING IN The Renaissance Period

Rings have been one of the most prominent jewels throughout history and represent a wide range of moments and meanings. Once you start recognizing the time periods and realize the historical significance as well as artistry, you might want to own a ring for every finger and perhaps from varied centuries. Here is a prime example of a collectors dream ring from the Renaissance period: an emerald ring set with emerald and rubies and held by stags, c.1550-1600. The shoulders of the ring are artfully enameled with a range of translucent and opaque colors. A wonderful detail is that the back of the shank features a small table cut emerald. From Western Europe, this ring features the opulence and ornate goldsmithing of the period which was distinguished by colorful gemstones, intricate details on the top, shank and underside of the rings, enameling and a whole lot of symbolism. 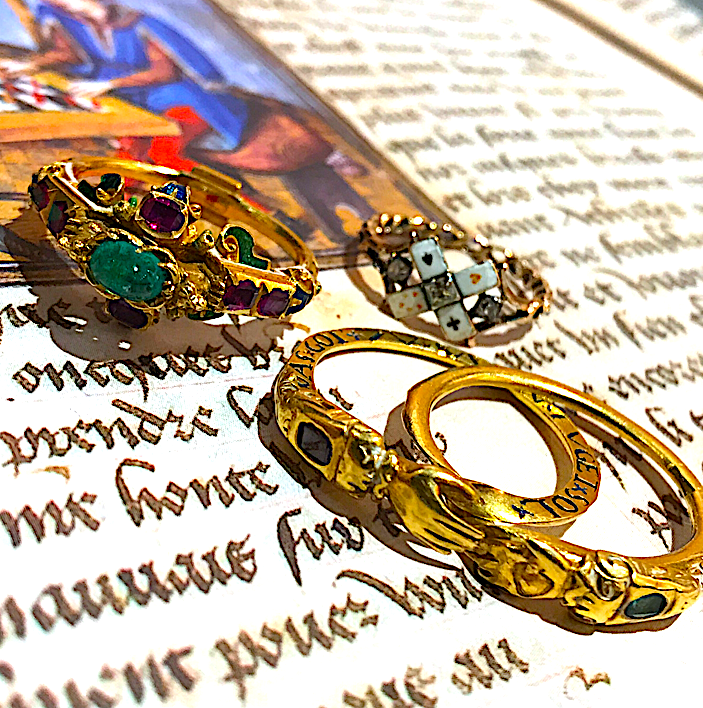 Speaking of which, this ring sits next to a Renaissance gimmel ring of clasped hands. (“Gimmel” derives from the Latin gemellus for “twin,” which refers to the double bezel and double hoop). The entwined hoops symbolize two lovers joined in marriage, with a ruby on one cuff for passion and an emerald on the other for hope and prosperity—perfect sentiments for a marriage band. It is from Germany and is dated 1517. But the sentiment doesn’t stop there. It is engraved on the palm and when opened, the hoop reveals a German inscription which translates into What God has joined together, let no man put us under.

The third ring in the background of the photo is 18th century and is comprised of diamond and enameled playing cards, c. 1780. In 18th-century France, playing cards was a pastime for all levels of society and spread throughout Europe and quickly extended to rings.

Statement making necklaces have witnessed a comeback and continue to grow strong. They’re seen at red-carpet events on some of our favorite style-setting celebrities and are being snapped up by jewelry collectors when they can be found in excellent condition. This Georgian Period emerald cabochon with mine cut diamond surround necklace is such a necklace. It is circa 1780, a time when many high jewels were set in silver over high-karat gold. This was also a time when jewelers of the period created pieces that had different fittings so they could be worn in more than one way. One of the alluring aspects of this necklace is that it can be unhinged and worn as two bracelets—one on each wrist—giving the arm a statement of its own. 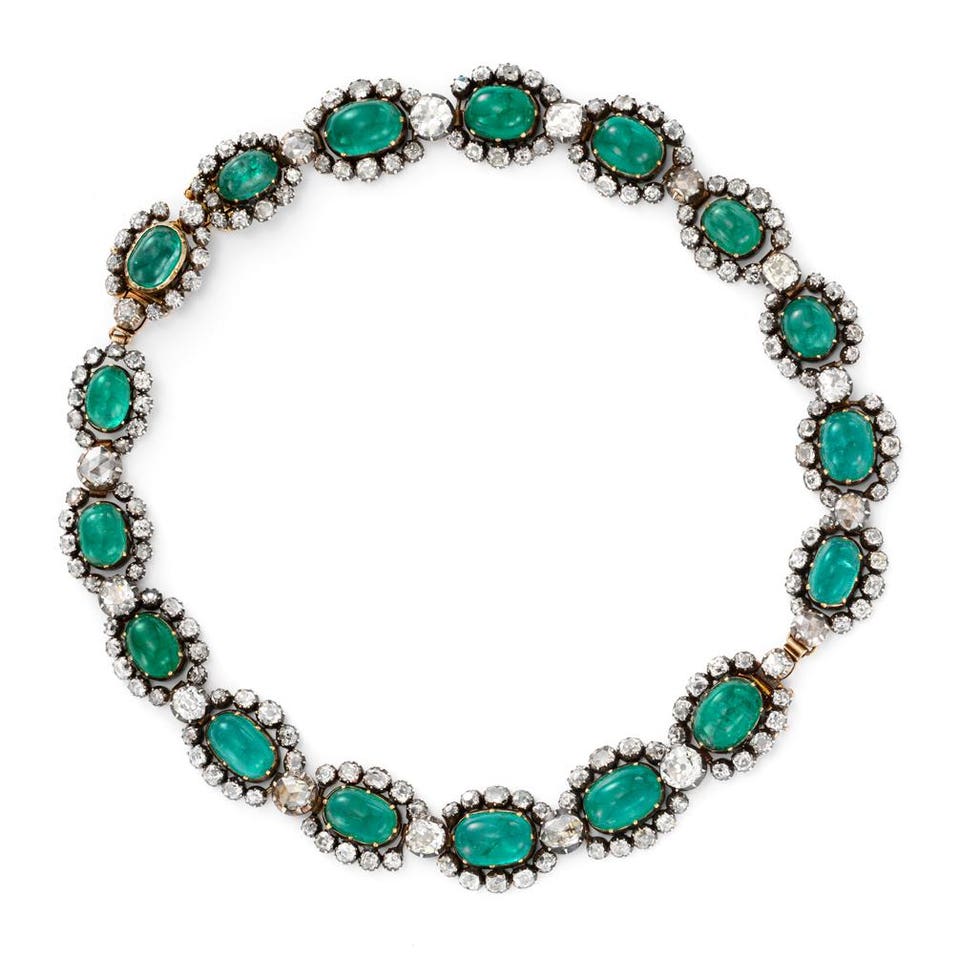 During the late Georgian and Victorian periods, British and American aristocracy and the upper classes took a European vacation that has come to be known as the Grand Tour. Those that went on the tour brought back souvenirs from the different cities they visited, most popular of which included cameos micro mosaics and pietra dura (mosaics made from real stones) from Italy. There was also a revivalist movement and many of the pieces revealed Etruscan  details in the gold work. The micro mosaics were crafted to depict scenes of the great architecture and sites of Rome as represented in this bracelet, which is in almost unworn condition. It is rare that the bracelet is in its original condition and was not broken up, which many of these multiple pieces were throughout time. 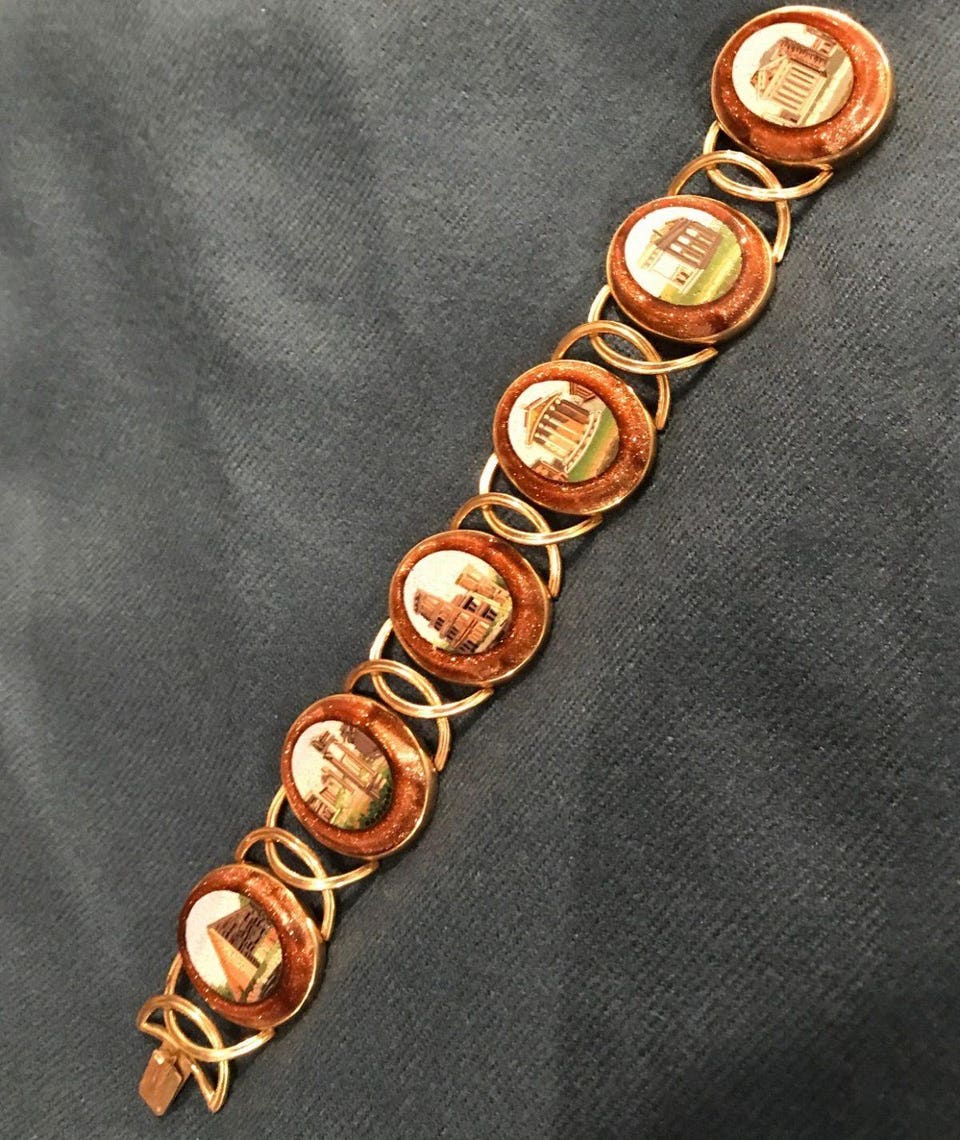 If you are a jewelry aficionado but immediately think of your grandmother when you hear the word “brooch,” then you might want to check out the red carpet, runway shows and what’s happening in both antique and modern jewelry. The brooch is back in a big way. Renowned houses such as Chamet, Chanel and Boucheron have all brought back high-jewelry brooches, as have other legendary houses. This has afforded women the opportunity to choose between antique styles and contemporary versions. Celebrities have offered lessons on how to wear them in multiple ways—on the waist of a dress, the side of a cardigan sweater, in the hair and in themes and/or colors with other brooches. This style is an exceptional example of a brooch from the later Art Deco period. It is a bit softer that the more structured, streamlined and geometric lines the period was noted for earlier on. Once the movement hit the 1930s, inspiration came from all over, offering more vibrant colors and an Asian or Eastern sensibility.  This style, which is English (circa 1935) is extremely well-designed with ruby, sapphire, citrine and amethyst flowers. The petals are formed from the gemstones, and it features an arched diamond frame. The five articulated drops suspending pear-shaped diamonds can be removed for a less dressy look or worn as is for special occasions. 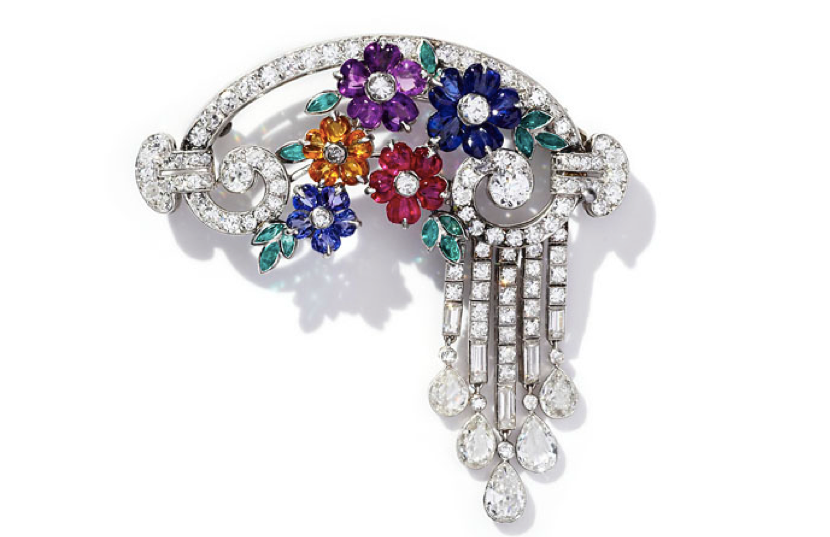 Wartski’s circa 1935 BroochCOURTESY OF WARTSKI

When we talk about provenance and backstory of a piece, this buckle necklace has stories to tell. It was designed by the legendary Fulco de Verdura when he worked for Paul Flato (designer to the stars, whose jewels appeared on many actresses in real life and in many Hollywood films). Verdura has previously designed jewelry for Coco Chanel and went to work for Flato before striking out on his own. Before even beginning to describe this piece, which is signed Paul Flato on the clasp, the previous owners need a mention. It was first owned by Linda Porter (Ms. Cole Porter) and then bequeathed to Ava Astaire, after which it was sold to the jeweler Fred Leighton. It now is in the collection of Siegelson. Fashioned after a belt with a buckle in the form of a semi-flexible band of pave-set fancy brilliant cut aquamarines accented with contrasting oval-cut and fancy-cut rubies detailing the buckle, eyelets, and strap trim, it is mounted in platinum and is a great piece of American history. 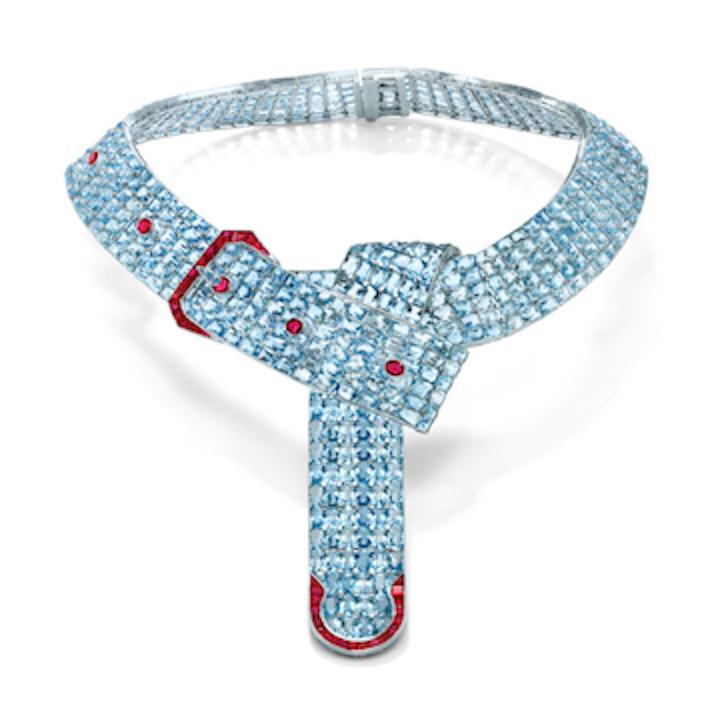 There was a lot more to be seen, tried on and coveted at both shows, If you are an antique and vintage jewelry aficionado, you can read more about what and how to buy and how to wear different antique and period jewelry, mix up centuries and mix with current styles in my upcoming stories.