Bremont is known for – and indeed kicked off its career with – creatively using priceless historical artifacts in limited editions of watches; these have included a piece of muslin from the wing of Orville and Wilbur Wright’s first flying machine, punch cards from the World War II Enigma codebreaker machines, and even wood and nails from Lord Nelson’s historical HMS Victory.

The year 2018 sees Bremont bringing forth its eighth historical limited edition timepiece, this one incorporating parts of a historical Concorde into the case back to celebrate the famous airplane’s 50th anniversary. Flying at twice the speed of sound, this British Airways plane carried more than 2.5 million passengers 11 miles high in the air between London and New York in half the time it took a conventional airplane (though those were not its only destinations). The Concorde made its final flight on October 24, 2003, three years after the tragic Air France Flight 4590 crash occurred, in which all the passengers and crew were killed.

Bremont’s 43 mm timepiece was purposefully styled to be reminiscent of the 1970s, which is when the G-BOAB Concorde (Alpha Bravo) first took to the skies. The third Concorde to join the British Airways fleet – its inaugural flight took place in 1976 – metal from this plane was given to Bremont for inclusion in the interesting limited edition. 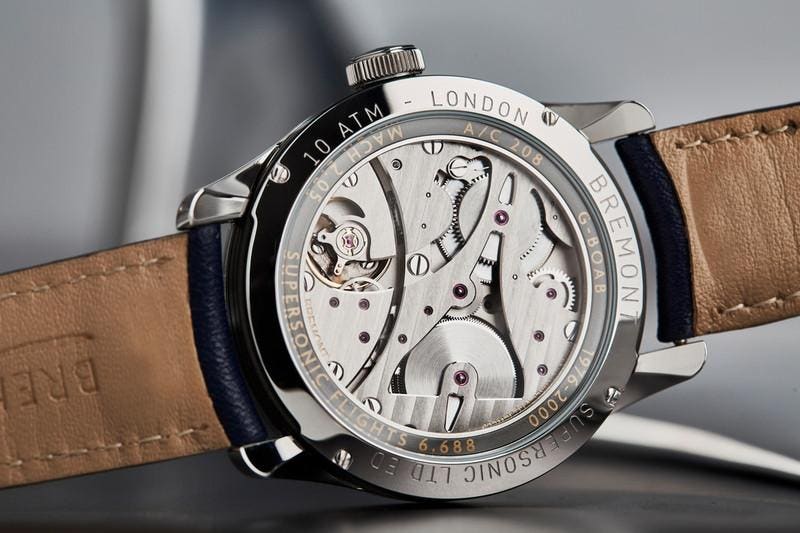 The manual-wind movement of the Bremont Supersonic: if you look closely you can see the outline of the Concorde in the bridgesBREMONT

The elegant silhouette of the Concorde has been recreated in the design of the Bremont Supersonic’s movement bridges; this watch is powered by the brand’s first manual-wind movement, which features eight days’ worth of power kept track of by the power reserve indicator at 12 o’clock on the dial. Aluminum from the famous airplane has been machined into the decorated ring encircling the movement underneath the transparent sapphire crystal on the back that is inscribed with the airplane’s main attributes (top speed, number, registration, years of active service, and number of supersonic flights).

Backes & Strauss and Franck Muller Team Up To Create A $500,000 Tourbillon Fit For Royalty