What’s rarer than rare? Take a prestige Champagne cuvée produced only eight times in history, bottle it in magnum, stash it away for 20 years, and adorn 10 bottles with fine jewels from the world’s oldest jeweler. This is Champagne Rare ‘Le Secret’ Fine Jewelry Edition, unveiled this month in Manhattan. These 10 bottles, adorned with either a diamond, emerald, sapphire, or ruby, will be the only ones ever produced, and those willing to shell out $100,000 to $150,000 per bottle just might be able to get a taste of ‘Le Secret.’

Champagne Rare, now its own Champagne house, was until recently the top cuvée of Piper-Heidsieck. Produced only in the best years from primarily Chardonnay with Pinot Noir, it is known for richness, elegance, and complexity, its crème brulée and exotic spice tones coming from lees aging rather than oak. The ‘Le Secret’ cuvée began in 1998, when Piper-Heidsieck cellar master Régis Camus had a shipment of empty magnum bottles and a batch of 1997 vintage Champagne that he wasn’t planning to release as Champagne Rare. As an experiment, Camus bottled just over 1,000 magnums of Champagne Rare and left them to age.

“I essentially forgot about them for 20 years,” Camus said over lunch in midtown Manhattan. That was until Camus mentioned the “secret” magnums to Piper-Heidsieck executive director Benoit Collard. Initially uninterested, Collard happened to watch a documentary featuring the French jeweler Mellerio, which claims to be the oldest jeweler in the world. Inspired by Champagne Rare and Mellerio’s mutual connection to Marie Antoinette – the last Queen of France was said to have acquired a Mellerio bracelet in 1780, and she was presented with a bottle of Rare several years later – Collard and Camus decided to collaborate with the jeweler to create a one-time only, limited release of gold- and jewel-adorned Rare ‘Le Secret.’

The luxury of the Rare ‘Le Secret’ Fine Jewelry Edition reaches a pinnacle with the bottles designed by Mellerio creative director Laure-Isabelle Mellerio. Interwoven white and yellow gold ribbons set with 510 diamonds flow from the one-carat jewel, each of which was selected to signify an aspect of the Champagne itself. The single bottle adorned with a diamond represents the purity of Champagne Rare; the three ruby bottles embody the wine’s bold flavor; the three sapphire bottles relate to its complexity; and the three emerald ones its minerality. Each closure cap is designed from 24-karat gold.

Of the 10 Rare ‘Le Secret’ Fine Jewelry Edition magnums, the diamond-embellished bottle and one of the sapphire bottles will be presented to select U.S. wine collectors starting at $100,000. An emerald-encrusted bottle is currently available at Harrods in London for $127,516.

Though the wine is technically labeled as a non-vintage wine, since the house did not declare 1997 to be a vintage year, there is only 1997 juice inside the bottle of Rare ‘Le Secret.’ It was also bottled without dosage, making the ‘Le Secret’ the first non-dosé cuvée of Champagne Rare. Initially reticent on the nose, it is clear that this wine is one with great potential, bundled up and poised to evolve over time. It opens slowly in the glass, maintaining verve and minerality as layers of salty earth, sandalwood, quince, and yellow fruit unfold. While there is great depth here, it is also exudes length and lift. 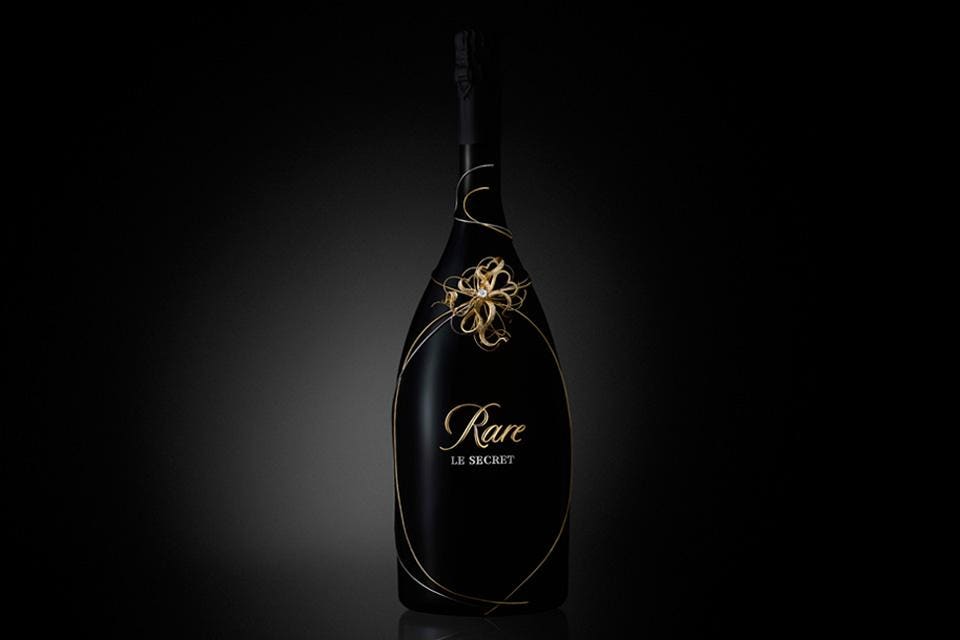 A single diamond-adorned bottle will be available and is expected to sell for $150,000.CHAMPAGNE RARE

Those who can’t get their hands on a bottle of the Champagne Rare ‘Le Secret’ Fine Jewelry Edition might be tempted by the ‘Le Secret’ Goldsmith Edition instead. The Champagne is exactly the same, but the bottles are plated with an engraved golden plaque rather than a traditional label. 1000 individually numbered magnums are available and will retail for around $1000 each.

While this will be the only release of Rare ‘Le Secret,’ Camus may have a few more surprises up his sleeve. He believes in the importance of experimenting, so this “secret” may not be his last.

Courtney Schiessl is a Brooklyn-based sommelier, writer, and consultant covering wine and its intersection with beer, spirits, food, and travel.